Thanks to OMY.sg and Casio for the opportunity, I got to visit G-Factory at JCube, bringing along le bf too. 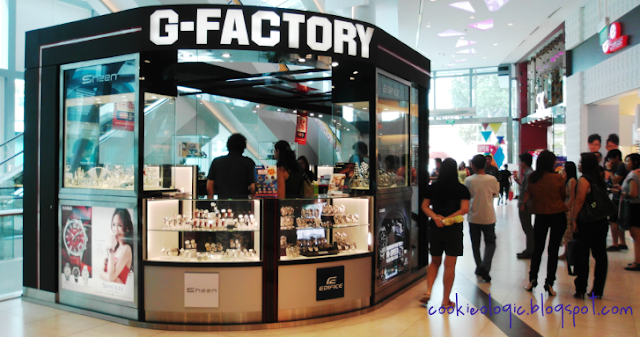 To be honest, I have always walked pass G-Factory at JCube whenever I go skating but I never stepped in and take a lot before.

It's right smack infront of the entrance so it's really easy to spot,
so most of the time I will just stare at it. 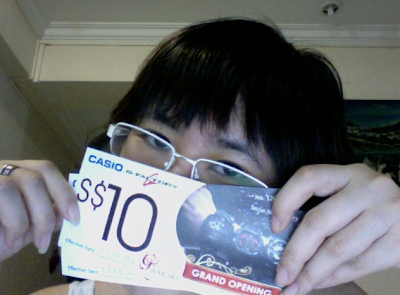 with courtesy of G-Factory, each of us got 2 $10 vouchers to be used at the shop itself.
there is now a watch that I am actually aiming to get.

Attending this event broaden my knowledge on G-Factory and CASIO, like for eg,
I never knew they were under the same branding.
I always thought they were 2 separate brands *bricks*

Anyway, before the event started, G-Factory offered us some drinks and donuts, and I can't seem to resist not taking photo of the pretty donuts.

They had the very nice lady, June Ng the Manager to introduce us more on CASIO G-Factory

There are a few different brands and model under Casio,
like


and others like Outgear, Data Bank, Beside, Futurist, Poptone and Phys.

I learn a fact that I never knew, and make us OHHHH when she told us.

"Do you know what does the G in G-Factory, G-Shock, Baby-G stands for?
that's GRAVITY "

Out of all the watches Baby G and Sheen's models caught my eyes.


Do you know that Kesha the ambassador of Baby-G? 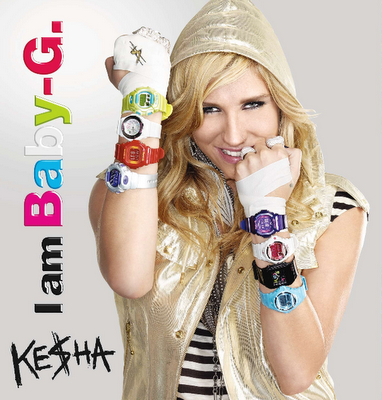 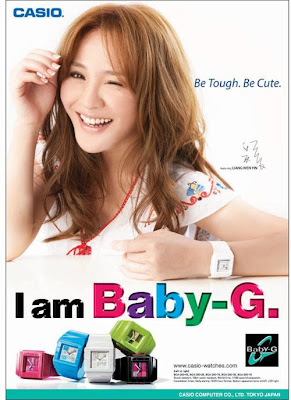 and guess who's the latest ambassador for Baby-G? 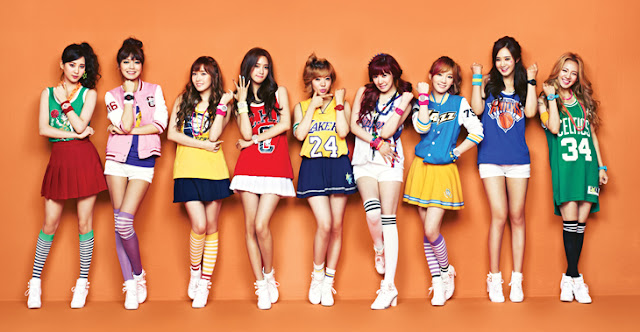 with the hallyu wave going on, K Pop is getting more famous recently, going towards international.
You can't deny over the fact that Girl's Generation will bring more market to Baby-G.
lots of fangirls will want to get a watch and be like them.


Guys do not have to worry, as there are brands like G-Shock.
and HEH, who says G-Shock are only catered to guys, according to June, G-Shock attracts the female market too.
Especially when having big watches is now the in thing!


For a more sophisticated look, females can look at the SHEEN series with really nice BLING BLINGS and
EDIFICE for the guys!


Here are some photos of the watches on display at G-Factory JCube.


There are mainly
G-Shock, Baby-G, Sheen, Edifice and Casio in JCube's G-Factory store. 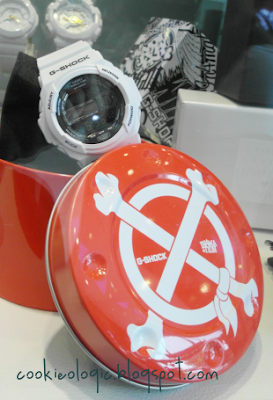 love the packaging, they really put effort in designing,
but somehow this reminds me of one piece, a lot.


It also uses wave ceptor which actually callibrate your watches by receiving signals from the sze transmission stations in the world, and corrects your time automatically.

some of the Casio watch, the swatches are really pretty right? 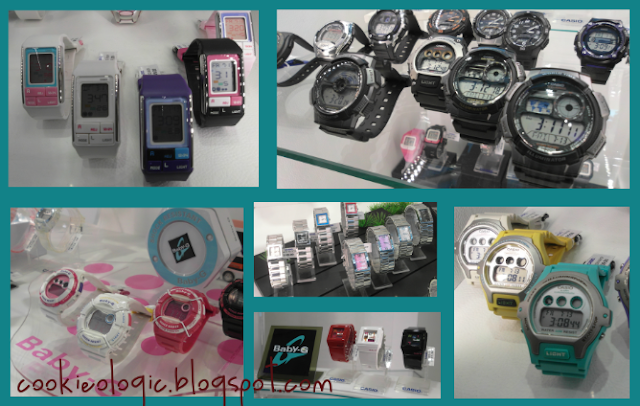 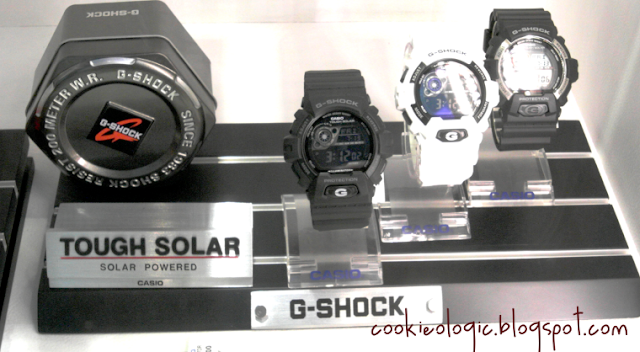 Everyone should know about G-Shock.
It's a gadget with so many functions, do not need to worry about dropping and spoiling it, after all it's
G-SHOCK, GRAVITY SHOCK for you! 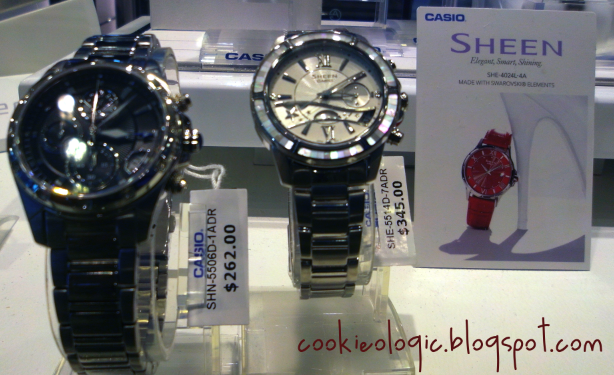 the blings are really BLING BLING,
and I am very much attracted to the blings ><


it's with added quality with sapphire glass, unique designs that functions well


and you can pair one with your bf/husband with the couple set of Sheen and Edifice!

okay, last but not least, my favourite of all 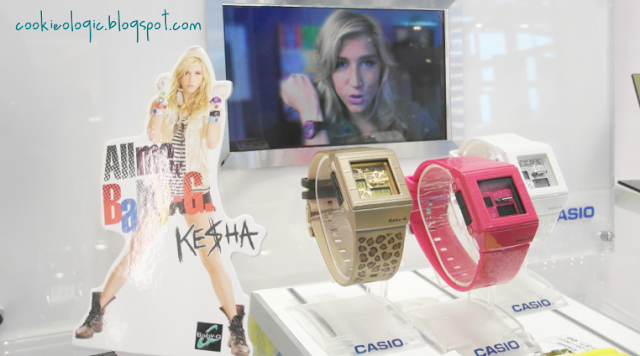 If you know me personally, you should know my love for leopard prints!
From bag, to belt, to dress to tops, not to mention the headbands and even my previous iPhone cover and lots more!
This would be a perfect add on to my collection!!

I am like staring at the gold watch as I typed this!

In a way of another, am proud of myself taking this photo, above.
I kinda just stood there looking at the advertisement, waiting for a right timing to capture the picture, and tadah!
There's Kesha close up posing with Baby-G. hehe.

Seriously, this series is really prettttttyyyyy.

Casio G-Shock is also the main sponsor for Kenshiro Gushi, one of the nation's top competitors in the sport of drifting, for the Singapore campaign. Remember what I say, G for Gravity?
So, do not worry about dropping those watches!

June told us that, while inventing and creating those watches,
the inventors and creators literally threw the watches down from somewhere high just to test whether it's "Drop-proof"
Imagine the times the had to try just to finally get it right?

The watches are also water-proof, let's look at the Baby-G series,
there is the 200-meter water resistance series, so just bring them down swimming with you!

Not to mention the awesome designs and colors,
with colorful swatches and designs ranging from cute, cool and even mature,
G-Factory cater to everyone!

I would love to have one for myself!

Oh-kay, enough with words.
Here are some photos before I end this post! 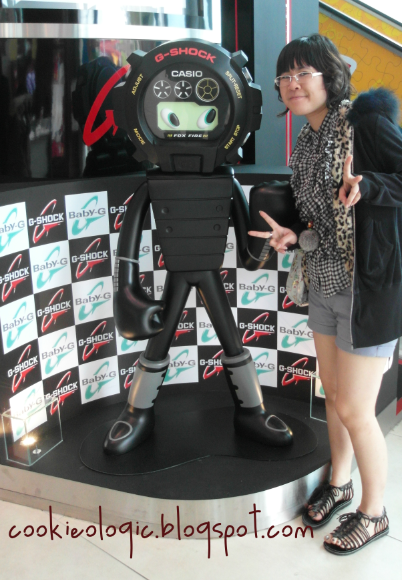 me posing with G-man figure outside the shop.
It's right infront of JCube entrance, so spot him, spot the shop.

Janet, please don't kill me if you see this photo! 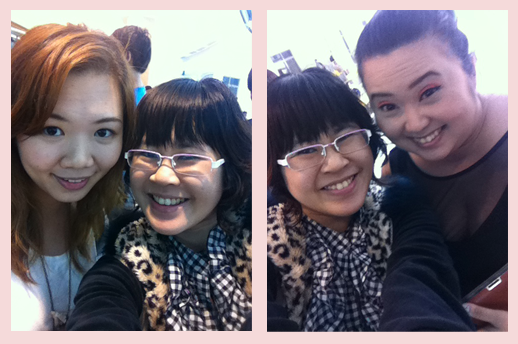 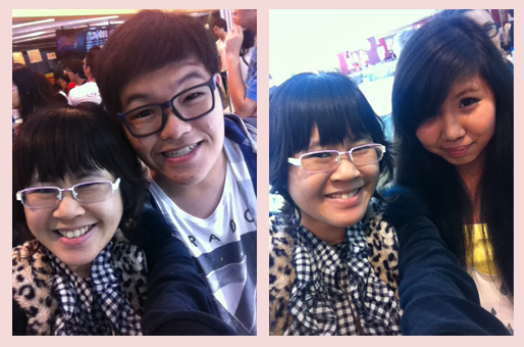 
and I didn't take photo with Ruiting @ http://lovelivfe.com/ :(
We did attend the event after all, with our plus one, family outing :x


The last photo of this post.
With the super nice manager, June Ng!
Thanks for telling us so much about G-Factory and the watches! 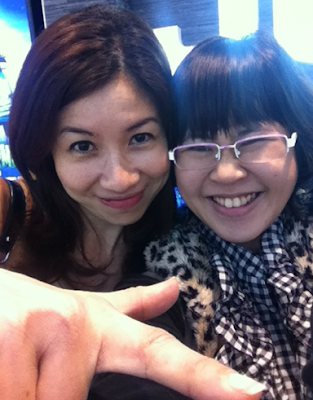 Just walk in JCube and you can see it!