I actually baked during the holidays BUT I think I accidentally deleted all of the photos ><
So, no more baking posts! It's pointless without photos.

Anyway, I went for a paintball session with cally and her group of friends.
It was really nice for them to ask me along ^^
Tonton didn't wanna go so Jake too his place ><

The Paint Ball place is at the Bottle Tree Park over at Yishun!
Can check out their prices and info all over at their website :


I was really excited since I always wanted to go to the park and look at the BOTTLE TREES. HAHAHA, so hooray!

I was really tired and had migraine the day before so I was quite reluctant, so hooray that Jake was driving!

Was worried that I will get injured, like seriously. Blue blacks and such?

Random much, I actually pointed at this tiger and went "LION" and then went -.- and started laughing at the silly me!

Everyone started changing before the games, all the guys were in their No.4, they said it's a better protection plan than normal long sleeves.
Jake and Edmund brought extra ones for us girls :)


We had a briefing and such telling us all the safety info and etc. Which are real important.
We paid by the amount of ammo we have, so it was separated into three different games.
1st game > 50 ammo
2nd game > 100 ammo
3rd game > 100 ammo + what's left over from the 1st two games.

All prepared and ready to FIGHT!!!

This is how the "battlefield" looked like, for the first two rounds.

The first time I got hit was at the collar bone!! It hurts like crazy!!!
Even though the girls were wearing vest with long sleeves, my collar bone wasn't protected that much.
I practically stunned there don't know what to do.
I think it wouldn't hurt that much if it wasn't the bone area! DAMN.

The 2nd round I got hit on my poor ring finger and that's the worse feeling I ever get.
Okay, I know it's really nothing compared all the other guys that got hit.
Some of their wounds were practically bleeding.
Drama queen here, IT HURTS OKAY, IT HURTS. My hand were practically trembling after it got hit.
It was painful at the point of time it got hit, after awhile it just went NUMB, totally numb. Unless Cally muamie decided to PRESS DAMN HARD AND RUB IT, otherwise it's really okay.
I am just very amused by the swollen bump I have on my finger.

The third round battlefield area!
It was a game of raise the flag kinda of thing.
6 VS 6. There's a flag in the centre line, you need to get it and run back to the so called base without getting shoot.
So if you are shot, you're "dead" and you need to run back to the base to "re-spawn" before trying again, or the other members can do it.
There was another item we need to collect after collecting the flag, so it's the same.
Then, there was a maze in the middle, and there's another flag inside, we need to go in WITHOUT THE GUN, get the flag and raise it.
The only thing was, ONLY FEMALES CAN RAISE THE FLAG. Seriously?

So the plan for me was to run all the way infront to stand by at the start of the game, but I freaked out much and didn't make it all the way infront.
In the end Vicki had to do it and get the flag and raise it, but she got shot down before she ever raised it.
IT'S FREAKING CRAZY.
The guys on my team have finish ALL OF THEIR AMMO, I am serious! That's at least 100 each, and the team on the other side still have many.
So I was the only girl left on the team and I have to do it.
Practically almost lied down damn low so there won't be any chance of me getting shot at.
YEAH, WE WON.
The crew, or empire or what were like damn shock to see that I got lots of ammo in my gun -.-

NO INJURIES IN THIS ROUND :D

The guys were crazily injured, no pictures to scare anyone out there.

We got like LOTS of ammo left? So it was enough for 8 people to have 50 ammos each.
That was just nice for the guys.

It was really fun and crazy, but this is one sport that I do not want to do often. Like once a year maybe?
I am not financially rich enough to do that anyway.

A group shot of all of us

Washed up and bathed, the conversation among the guys were really funny.

Managed to take a photo of the bottle tree before we left.
This was taken on the car on our way out, so pardon the lousy skills and framing, right smack in the middle *facepalm*

Headed down to Golden Mile for late lunch.
The girls were all in Jake's car, just nice for photo taking :D 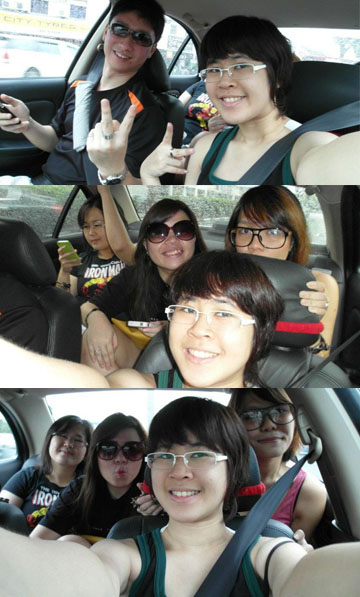 We are crazy, the girls + edmund + jake went for Left 4 Dead II after lunch while the others went for Mahjong.
L4D2 skills went lousy, I was dying most of the time :(
Plus, there were very rude random players joining our team.
If they want to complain, why can't they just leave the game and join someone else -.-

Afterwards we went down to Holland V for dinner, leaving with only Vicki, Cally, Edmund and I.
Badens before dinner since Everything with Fries are really packed.

The 3 of us girls talked about stuffs, and know something about Evelyn which really got us all very worried.

Practically started drawing on the papers before the food arrived.

oh, their egg soup thingy is really nice, and not to mention their DIE DIE MUST EAT nutella tart :D
at 7:52 PM