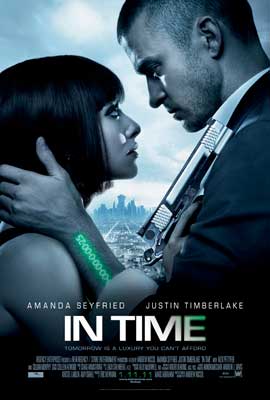 Honestly speaking, the first reason why I really wanted to watch this movie was because of Justin Timberlake.
Yeah, fan girl or what so ever, I am just a fan to a certain extent, that is to watch movies he's in.
Anyway, the movie plot attracted me too, especially the super duper damn cool trailer?

I am not that kind of person who really remember who's who, I just remember them as "oh, the girl in blah blah", "oh, that guy in blah blah". Unless, I take interest in that particular actress or actor.
So, IF I did not wiki this movie, I won't realise Amanda Seyfried was the girl from Red Riding Hood and the best friend from Jennifer's Body. Like come on, her style was so different, to the extent I really don't see any slight resemblance, okay maybe the eyes after I checked.
Not only her but Alex Pettyfer, who happens to be the villian in the show, who happens to be Number Four, and the guy from Beastly.
I just totally remember him as "No. 4" yeah, that's his name to me.

So, In Time is set in a futuristic time, with retro influence, erm post-retro? I don't know, NEO retro?
Anyhow, it's about how humans generic are controlled and people stop growing at the age of 25 years old.
Time is their currency, and to control over population, humans are given extra year to live after 25.
They need to earn their time to continue living, like how we earn our money.
Thus, they tends to look exactly the same throughout when they reach 25 years old.
There was this 'rich' guy who gave all his time left, which is like 100 years plus, to Justin Timberlake's role, and then committed suicide.
Then, the time keeper, who are like the police in the world, is trying to catch Justin Timberlake, suspecting him killing the 'rich' guy to get all the TIME (= money).

Am not going to be a spoiler and talk about the plots here and there.
However, I really do like how the story flows?
There's the ups and downs that keep you awake and make it interesting and exciting to follow.
It's really hard nowadays to find a movie to actually have a nice story flows.
Normally, the concepts are the points that attract people, but the flow might bring down the excitement to it.

The one thing I love this movie a lot a lot, was the set.
The colors was amazing, the "world" was like seperated into different divisions, and it's like the color schemes differ too.
The tinge of blue in the "HIGH CLASS SOCIETY" and the red-ish set for the "SLUMBERS areas".
It was just nicely being fit in, subtle enough to let you feel the characters around in the particular set, telling off their characteristic.
The green from the glow of their clock on their hands was also nicely fit in with either "divisions".
The colors was so nicely played with, and it clearly shows the mood and everything else.
Set was super duper nice too? Camera angles and layout wise too.
The set up was really well planned, to me.
BF loved the set too, so yeah.

I would seriously love to own this movie? So, I can print screen it off and keep them as color and set references.