The Flowers of War

Got to catch "The Flowers of War" thanks to OMY.sg for the special screening.
This post contents spoilers, read at your own risk. 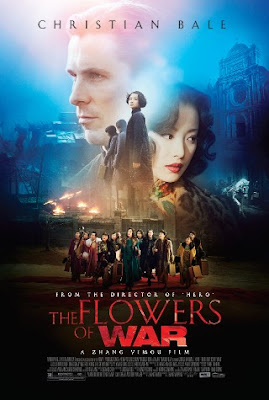 Directed by Zhang YiMou and Christian Bale (Dark Knight) and Ni Ni, a new actress and was nominated in Asian Film Awards and Golden Globe Award, The Flowers of War.

"It is set in 1937, Nanjing, China, during the "Rape of Nanjing", at the time of the Second Sino-Japanese War. A group of escapees, finding sanctuary in a church compound, try to survive the plight and persecution brought on by the violent invasion of the city.[4][5] The film is based on the novel 13 Flowers of Nanjing, by Geling Yan." -wiki


Actually we weren't late for the screening at all, and actually arrived at least 5 minute before ticket collection. The thing was WE COULDN'T FIND THE PLACE :(
In the end we spend the time walking around Shaw House trying find where the theatre was, had to call the in-charge twice to finally get the place right.
Which resulted in missing the opening and sitting seperated from tonton :(

On a side note, I saw Onishi Sensei while finding the place ^^ miss her lessons much.

Anyway, based on a historical novel, the plot was set back in Nanjing during the War World II, Second Sino-Japanese War.
The church was a refuge for a group of female students and a group of prostitutes, thinking the church will be safe from the Japanese as it's a foreign institute.

How the students looked down on the prostitutes, refusing to share with them, yet keep their hiding place safe from the Japanese soldiers.
It was really sad to see the part where the girls got attacked when the Japanese army came to find girls to rape resulting of a few dead.

I really teared at the later part of the movie, touching me bits and pieces.
Sacrifice chosen, friends made. It's really a movie on how human can be, evilness and touching.

Christian Bale's character decided to act as the priest of the church and tried to save the students.

You really need to watch to know the story, shall not spoil it for you.

Like every other Zhang Yimou's movie, the shots and angles are nicely directed.
Artistically shot with framings you might only get once in a while, with the nicely set colors and timing are just important too. Rays might effect just the entire shot and the feel will be different.

The story touches tint of raping and killing and yet Zhang Yimou's able to protray them in such a sad and pity yet touching scene and you really feel for it.
The angle, the framing and even the color shows all of it.
All this makes the story even stronger and the impact you get from it, it's just like you are there watching it live. 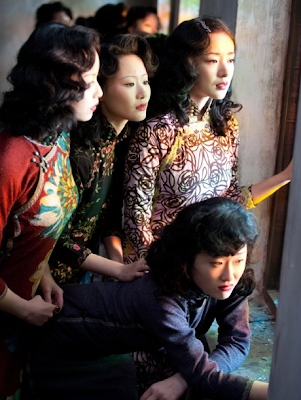 I don't know whether you can see it, but the color of the clothes PLUS the colors of the rays refracting from the stained glass. Isn't this shot beautifully directed?

New girl NiNi is really good with her acting, it's like people are looking at her to continue Gong Li and Zhang Ziyi steps, whom are also brought to fame by Zhang Yimou.
What they call oriental beauty? 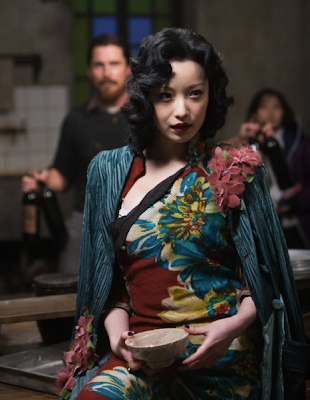