http://www.thecontroversialfiles.net/2013/07/chinese-eat-baby-soup-for-sex.html
(WARNING. PHOTOS IN LINK ARE DISGUSTING, click at your own risk)

Fret not, I am not going to post ANY photos here, since I couldn't stand them either.

According to the article, people in China had been eating babies fetuses to 'increase overall health and stamina and the power of sexual performance in particular'.

Which I do not understand, how can eating your own flesh helps in any way?

People sell dead babies, aborted babies or even placentas for hundreds or even thousands in China.

It's all because of superstition.


Why is it that females are not as good as males?
Without females in the first place, do you even get any males?

" .... infant corpses and fetuses have become the newest supplements for health and beauty in China. Not only is the placenta considered a beauty remedy, but also aborted fetuses are much sought after delicacies"

"In Guangdong, gourmet body parts are in high demand and can even be purchased through hospitals."

What the hell are the hospitals doing?

Other than in China, there are other places that practices Cannibalism.
They are practiced because of ritual rites, cultural practices, in war of tribes ...etc

Or in last resort in one is suffering from famine, which happens in third world country.

I believe those reasons are more believable than what the Chinese are doing.
Though in a way or not, both I find them wrong.

It's just so cruel and, disgusting.
Imagine eating your own kids, parents, or even your own flesh.

Oh, and I remember reading certain article on how some guy cut his own private parts and serve it to his customers as special dishes? *faints*

and Scientifically, don't one get sick or mutated from eating human flesh because of the chemicals, bacteria our bodies have?


The entire article lead to 2 of my friends and I talking about certain chinese horror films. 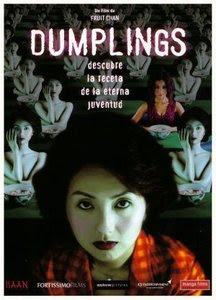 Staring Miriam Yeung.
Dumplings, 餃子
A story about a rich woman wanting to keep her looks and beauty and ate certain special dumplings,
which were made from unborn fetuses.

I am half curious to watch the movie but most likely will end up being too freak out to watch it.

Seriously, what has the world turned to?
Don't you think it's disgusting too?
at 4:09 PM